Deepak Nitrite Limited has announced its financial results for Q4FY20 whereby the revenues stood at Rs. 526 crore as against Rs. 488 crore in Q4FY19, higher by 8% Y-o-Y. PAT stood at Rs. 116 crore in Q4FY20, as against Rs. 57 crore in Q4FY19, registering growth of 106% on a y-o-y basis.
Company's consolidated turnover for FY20 also grew by 57% whereby revenues stood at Rs. 4,265 crore as against Rs. 2715 crore in FY19.
Commenting on the performance, Deepak C. Mehta, Chairman & Managing Director, said, “I am glad to announce that we have ended FY20 on a positive note with record topline performance and highest ever PAT despite disruptions caused due to the COVID-19 pandemic. We have ticked all boxes with volume growth, improved realisations as well as cost control. This was further supported by reduced finance costs and a favourable rate of corporate tax. The growth in the fourth quarter could have been slightly higher as we lost 10 days of production due to the national lockdown.
We responded quickly to the circumstances by implementing a Business Continuity Plan which focused on ensuring safety and security of all our employees and adhering to the guidelines recommended by the respective Government authorities. We have re-commenced manufacturing operations in a phased manner based on approvals from local authorities and are focused on safely and steadily increasing utilisation levels while exercising tight control over costs.
Even as we navigate through the disruption caused to the operating environment, we remain confident of the agility and nimbleness of our business operations and believe we are well positioned to rebound quickly as the operating environment stabilizes. In addition to capitalising on demand for intermediates in domestic and international markets, we are working on plans to forward integrate into downstream derivatives of phenol and acetone, of which, the first project for IPA has already commenced commercial production.” said Mehta.
Deepak Nitrite has announced elevation of Maulik Mehta as Executive Director & CEO with effect from 1st June, 2020 in place of Shri Umesh Asaikar who is retiring on 31st May, 2020 after completing his term of appointment, as approved by the Board of Directors at its meeting held on 26th May, 2020.
The company has acquired various parcels of land during the year for its expansion plans. This includes 127 acres acquired at Dahej, 1.4 acres acquired in Hyderabad adjoining its existing facility and 1.5 acres acquired in Roha again adjoining its existing facility. The company has paid Rs. 141 crore in aggregate for these land parcels, which has been capitalized during the year.
Update on Deepak Phenolics Ltd:
• DPL ended FY20, it first full year of operations, with phenol production volumes just short of 200,000 tons or 100% capacity utilisation. The shortfall was due to shutdown of the plant for 10 days in March 2020 due to the nationwide lockdown. Operating a large, global scale plant at full capacity utilisation in the first complete financial year of operations is validation of the scale of effort, preparedness and efficient management of complex material logistics. In each quarter of financial year 2020, the performance has progressively improved and but for the shutdown, Q4 volumes and revenues would have surpassed the watermark achieved in Q3. DPL commenced commercial production of Isopropyl Alcohol (‘IPA’) at its manufacturing facility situated at Dahej, Gujarat effective April 21, 2020. This facility has capacity to manufacture 30,000 MT of IPA annually.
o IPA is a solvent primarily used by Pharmaceutical companies and is also used for manufacturing sanitizers.
o The company has stated that it plans to develop capacities to produce value added derivatives of phenol and acetone through forward integration. The launch of the capacity to manufacture IPA represents the first step towards achieving the vision of developing a comprehensive basket of downstream derivatives. 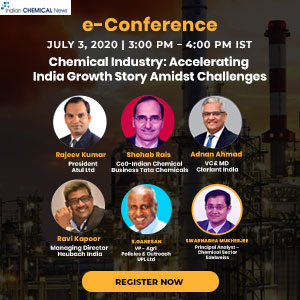